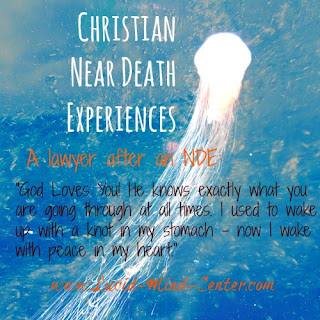 In this October 2017 class we have looked at Christianity and the Life to Come and we have examined the modern phenomenon of Near‑Death Experiences (NDE).

We looked at Dr. Raymond Moody's groundbreaking book Life After Life, Mockingbird Press, 1975.  We looked at Dr. George Richey's NDE of 1943 – the one that set off the relatively new review of this material by the University of Virginia, Charlottesville, VA.

We looked at the historical aspects of Socrates through his people Plato's writings in the Phaedo of the immortality of the soul.  In the Phaedo[i], Plato discusses pretty much the concept that Christians seem to now accept as the immortality of the soul.  Though that highly technical concept is slightly different as they found in the New Testament.   The New Testament (technically) seems to teach of a physical resurrection when the dead will rise (get their bodies back – not sure I want mine back.  (smiles)) and live with the Christ in a resurrected state.

Then we looked at particular NDEs that I picked because they were NDEs that cannot have been forged and were outside of the possibility of individuals desiring to achieve some outcome or initiating the NDE on their own.

For example (here in Georgia) I brought you the very real NDE of Viola Horton[ii] who had an NDE in 1976 in Augusta, Georgia and here NDE made it through various publications and was extensively vetted.  I also found all of her historical data and produced that to the class.  She existed; the event was real.

Then we looked at Cecil Willie, an individual in Baton Rouge, Louisiana who had an NDE from a bleed out in Baton Rouge.  He could not have forged his statements.  His showed a real and interesting experience with his deceased relatives and the living Christ.  I showed the class the NDE of Inez Dawes in 1925 in Minneapolis, MN.  It would be hard to falsify that NDE almost 100 years ago.

Then we looked at Chris Markey, the lawyer I spoke to from Chicago, Illinois and his NDE from heart surgery.  There were many others: Richard Cole, Dr. Mary Neal, Martha Sinclair, Charles McKaig, the unassuming postal worker in Knoxville, Tennessee as made famous by Maurice Rawlings.  It would be difficult to forge that event since Charles McKaig had an NDE (and went to hell) on the stress test in Dr. Rawlings' office.  And on and on and the list is endless.

As I indicated, when Moody published his book in 1975 he had studied 150 events.  The current collection (and there are numerous databases) www.nderf.org [iii]based (potentially) in New Orleans, LA (actually it is Houma, LA) has a database of 25,000 NDEs of which 5,000 are exceptionals.  Thus current sample size is enormous in comparison to Moody's original sample size.

So what can we take away from this study?  11 to 13 percent of these individuals have negative experiences and we're all hopeful that we do not.  The vast majority have extremely interesting experiences and show (if you can believe them) the almost complete certainty that this is not hypoxia[iv] or anoxia[v] and that there are interesting worlds and things to come beyond our imagination.   A great beyond awaits us all.

The reason that hypoxia or anoxia cannot be an explanation for all of these events is that with 25,000 sample size we have thousands of veridical (coinciding with reality) statements that are provable in the third dimension outside of the physical presence of the preparer's deceased or person who testifies.  That is there must be the existence of consciousness outside the body or (in Occam's razor) these events must exist because thousands of these individuals in the sample size testify about third dimensional events in time and space that occur far away from where they are having a cardiac arrest or dying in a car accident, etc.

Thus, following Occam's razor the most likely event or the simplest outcome is these events exist otherwise you have to go through the continuous tortured materialist reduction theory of anoxia and that all that exists are the material matter and atoms that we define.

And if you chase any particle physicist (God forbid that my son is now headed in that direction) there's nothing there.  The farther you go down into the material from electrons down to protons to neutrons to quarks, you find that eventually there is nothing there.  Its only energy.  All is energy.  And, energy can be neither created nor destroyed.[vi]

So what is the answer?   Personally, I put my trust in the Christ (who many many of these individuals encountered).   Acts. 16:I.   I will leave the conclusions of this material to the reader.

Conclusions that I think are reasonable:

Life Continues
Christ Exists
Heaven and Hell exist
Life continues without out physical bodies
We get, sometimes, another body
Communication is always by telepathy
Many times our entire lives are reviewed (life review).
People we have known appear in NDEs.
Other belief systems (may) exist
The NDE experiences are not homogeneous
Sometimes atheists go to heaven
There seems to be a purpose or
mission to our lives
Many are told to “its not your time”.

The Bible is a Guide to a great life.

[i]
Phaedo.  Spoken through Phaedo of Elis – an eyewitness.

[ii]
Viola J. Horton, Augusta, SC.  Died in Gallbladder Surgery on May 5, 1971.  She listed at Chapter 17 “Who’s Dead” of Shockey, Peter. Reflections of Heaven: A Millennial Odyssey of Miracles, Angels And Afterlife.  Doubleday. 1999.

[iii]
If you are interested in reading many of these events in their “raw” format, 25,000 of them may be found at www.nderf.org.